In its second year, the Great Trail Race took place this past Sunday, October 8th. It’s another great, local race put on by Big Blue Adventure and is a fundraiser for Tahoe Nordic Search and Rescue. The event offers participants the ability to run or ride one of two point-to-point courses: the Classic and Elite Courses. The Classic Course which is comprised of roads, fire roads and trails through the Tahoe National Forest and totals about 17.9 miles with about 2,000 feet of elevation gain. The Elite Course follows a portion of the Classic Course, but diverts onto technical segments of the Tahoe Rim, Tevis and Sawtooth Trails to increase the mileage to about 21.5 miles with about 3,000 feet of elevation gain.

Leading into the race, I had been battling a couple of injuries that had really put a damper on my running since early August. First, I had pulled my calf which pretty much eliminated any running ability whatsoever until the first week of September when I was able to pick it up and run a couple of races, including the Truckee Half Marathon. Shortly after the half, my lower back freaked out and put a stop to pretty much any physical activity whatsoever. It was bad and I suffered from muscle spasms that would make me convulse as though I was wearing a shock collar. Great! Just in time for Halloween! I could be one of the zombies in Michael Jackson’s Thriller video. Lucky for me, my back decided to calm down two days before the Great Trail Race. Sweet!

The afternoon before the race, Cortney (aka Thing 2) and I went for a three-mile shake out run in our neighborhood and continued our current debate of “Costumes or No Costumes”. When we were about a quarter-mile from home, my calf started cramping up and becoming quite painful. Are you f#$%ing kidding me? The calf heals up then the back goes out. The back heals up then the calf starts acting up. WTF? The “Costume or No Costume” was over. We decided against costumes as my mood really wasn’t going to be conducive to Thing 1 & Thing 2 antics. I was discouraged and Cortney could tell.

Just then, my very fast former collegiate runner friend, Tiffany sent me a text to let me know she had decided to sign up last minute and run it with us. “OK, but I’m going to be slow – my calf started cramping and I’m going to take it easy.” Tiffany insisted she was ok with that and promised to leave me as carrion for the crows if she wanted to bolt. I went home and spent some quality time with my foam roller, compression socks, Arnica and topical magnesium. Just in case all of my muscle spasm and cramping issues were due to a potassium deficiency, I had a couple of bananas as a snack.

By some minor miracle, I woke up the morning of the race and my calf was markedly improved – enough to give it a go and at least start the race. Cortney’s Front Door Race Shuttle Service picked me up at 7:55 and we then drove the mile or so to get Tiffany. All three of us were adorned in bright pink shirts and black bottoms of some sort. Not costumes but we pulled off matchie-matchie just for fun.
Just after checking in and getting our bibs, we ran into Steve Buelna and his friend/neighbor, Raeleigh Harris. Steve proceeded to chide us for not wearing costumes and as soon as Raeleigh spoke, Cortney shouted “You are adorable!!!!!”. Raeleigh, you see, has the loveliest accent and 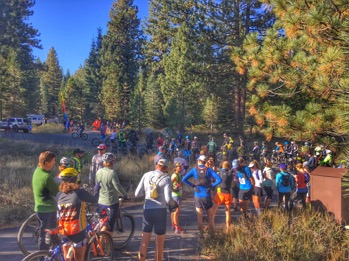 clearly Cortney was perfectly caffeinated. Turns out Raeleigh is also incredibly fast and was the first female to cross the finish line of the classic course wow! But that’s her story to tell.

Fast-forward to the race start; Bryan Rickards of Big Blue Adventure, sent us all out in waves about a minute or two apart. First the cyclists doing the elite course followed by classic and then runners in the same order. The three of us started out at a very conservative jog to allow my calf and back to warm up and for me to take inventory of my aches and pains. All systems were a go so we jogged and chatted our way through the first 3.5 miles of rolling hills on fire road. The incline increased just after the 3.5-mile mark which forced me to back off and power hike for fear of straining or injuring my calf. The amazing friends that they are, Tiffany and Cortney hung back with me instead of ditching me and running for the hills [literally]. 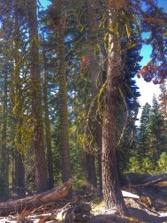 weather standpoint. As we climbed the sun warmed our faces and made us 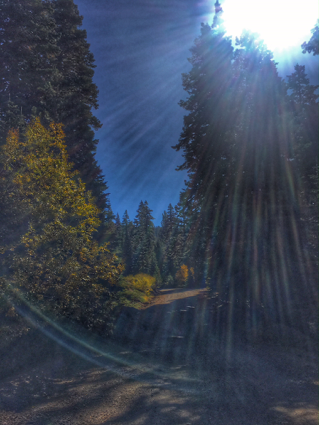 grateful for the hats and sunglasses we were wearing. The crisp fall air, had clearly worked it’s magic and fall color began to greet us along the way. Green moss clung to shady sides of pine tree trunks and branches. It was beautiful! If there’s a silver lining to being injured and being forced to slow down, it’s that you can actually take in the scenery rather than focus on running fast. At least that’s what I’m telling myself right now.

Well, we had plenty of time to get in all of the therapy, bitching, joking, goofing around and picture taking we wanted since we were climbing (and alternating between a slow jog and power-hiking) pretty much until the 10.2 mile mark, as you can see from the elevation profile below.

Once we crested the summit, we were greeted by yet another smiling, friendly volunteer manning an aid station with fuel and hydration. “It’s all downhill from here ladies – you’ve reached the summit!” That was music to our ears!
The views from the summit were beautiful with fairy-tale meadows of granite, squaw carpet and towering pine trees lining our path. 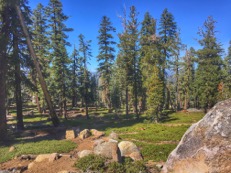 My calf had no problems with the downhills so we didn’t have to hold back. It’s a good thing too, because at this point we were getting hungry and we knew there was beer and a BBQ waiting for us – FEED OUR LEGS! 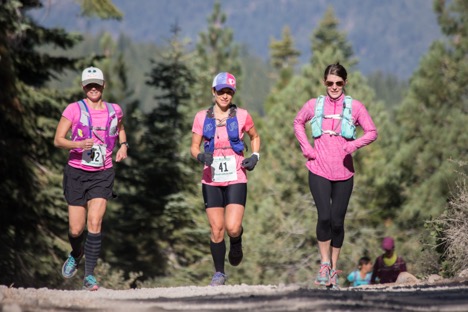 We continued down the paved road from the summit for about 3 miles where we diverted off of the pavement and onto the single track trail known as “Woop-dee-doo” which we wooped dee dooped all the way through Burton Creek State Park for the last 4ish miles of the race. Cortney and I couldn’t help ourselves so we jumped over the finish to an awaiting Tiffany.

You’d think we would be a little fatigued and moving a little slowly, but heck no, not when there’s food involved! Get out of our way – we bee-lined it to the BBQ to collect our grub to refuel and beer to numb our legs.

Thank you once again to Big Blue Adventure, Tahoe Nordic Search and Rescue and all of the volunteers for another great event in our Truckee/Tahoe playground!

Sign up for our email newsletter for event updates, training tips, and special offers from our sponsors and partners.
Get Email Updates